The MUSEUM of 2D ANIMATION

​The ultimate objective of the ‘National Museum of Animation’ is to create a non-profit entity that supports the ‘Past’, ‘Present’ and ‘Future’ of animation in the USA ~ especially traditional 2D animation, which is the foundation of all other forms of animation. This cannot happen overnight however, so the NMA sees its existence in 4 Stages…

V.1.0 A launch ‘ANIMATION IS DRAWSOME!’ Exhibition/Festival in Pacific Northwest. The Exhibition will include amazing artwork from behind the scenes of some of the finest animated films ever made ~ from both the past in the USA and from the current throughout the world. Additionally, there will be a film festival screening of the ‘Golden Pencil Award’ winning films form around the world and a ‘Vendor Hall’ that supports local artists and NMA sponsors. The Exhibition will take place at a Northwest location at some time during the spring of 2018.

The very best of the spring 2018 will tour the Pacific Northwest in the fall of 2018, bringing the best of the artwork, award-winning films and a featured lecturer to towns and cities in Washington and Oregon. In that the NMA hopes to bring both recognition and support for the creation of the first, Pacific Northwest-based National Museum of Animation in the USA.

V.2.0 Permanent bricks & mortar National Museum of Animation. The NMA will begin modestly somewhere in the Seattle region in early 2019. The Museum will feature much of the finest art, tools and technologies from the past as part of its permanent exhibition material. However, NMA will be an ‘active’ museum too, so there will be a store provision for animation fans to buy books and equipment, plus there will be evening and weekend courses when the local community can be involved with fun, animation-related activities, such as creating flipbooks, designing cartoon characters and even having face-off competitions through short, team-based filmmaking activities. The NMA will also provide the possibilities of personnel visiting local schools and colleges to show, teach or mentor high school students who are interested in animation as a career.

V.3.0 With the ‘Past’ of animation established and flourishing, the NMA will next support the ‘Present’ of this great artform. Consequently, it will fund its own Academy of Animation, bringing the highest teaching to the young and passionate animation talent that seeks to take their interests further. The NMA will host courses, summer camps and even offer a 2-year ‘Certificate of Animated Excellence’ program for those wishing to make a career of animation as their life objective. Classes will also be offered for existing professional animators in the Game, TV and Film industries, where advanced coaching and mentoring will take students’ work to the next level. Events and outreach activities will continue in the local schools and community, keeping the ‘fun’ of animation accessible for non-career animation fans too. 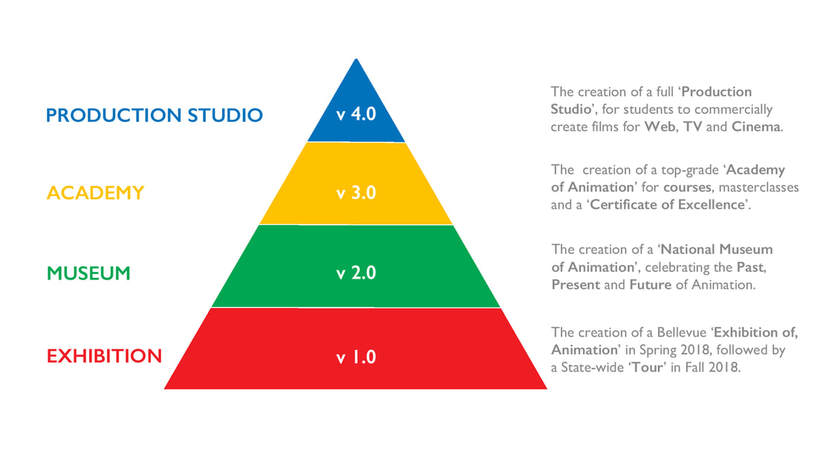 V.4.0 ‘Production Studio’. With the Academy successfully established, the final piece of the puzzle is for the NMA to address the ‘Future’ of animation in the USA – the creation of its own ‘Production Studio’.
​Selected graduates from the Academ’s ‘Certificate of Animated Excellence’ will be invited to be part of the NMA’s own commercial production projects, where they will be allowed to apply their skills professional, gaining work experience at the same time.

Completed productions will ultimately earn a financial return, the profits of which will be recycled back into the coffers of the non-profit NMA to be used as resources for future activities and initiatives. In this way, although the NMA will initially be reliant on grants and sponsors to commence its work, the ultimate objective will be for the organization to be eventually self-supporting.